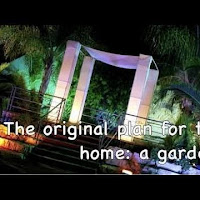 The Garden of Eden was called "Paradise". It covered an extensive tract of land. The Tree of Life was in the center of the garden. Anyone who ate from it lived forever, because it perpetuated life. The devil was desperate to eat from it, but he was only allowed to stay around the "Tree of Knowledge of Good and Evil." He thought that by going through the wandering Eve, he could get to the "Tree of Life." But the angels with the flaming swords at the gates into Paradise stopped him from accomplishing his first priority. Sin and sinners will not be able to continue forever, but will be extinguished in the Lake of Fire and burned to ashes. God, the rightful King of earth, placed Adam and Eve in Paradise. He personally planted a garden in the eastern part of Paradise before He made Adam and Eve. The two anointed covering cherubs in the Most Holy Place of Solomon's Temple faced east. The two pillars at the entrance of Solomon's Porch, Jachin and Boaz, faced east. The temple was the House of God, and the two pillars symbolized a male and female, Jachin as the male, and Boaz as the female, husband and wife. This was according to Jewish verbal tradition from the Mishnic people of the Prophetess Huldah's era. God the King created our earth in six days and called it very good! He rested the seventh day, so He could enjoy what He had made. He is our example. We are to enjoy the seventh day also to contemplate on the works of the King and His great sacrifice to save our human race from extinction. The earth was exceedingly beautiful. The surface was diversified with mountains, hills and plains, interspersed with noble rivers and lovely lakes. But the hills and mountains were not abrupt and rugged, abounding in terrific steeps and frightful chasms as we know of today. The sharp, jagged edges of earth's rocky framework were buried beneath the fruitful soil, which everywhere produced luxuriant growth of verdure. There were no loathsome swamps or barren deserts. Graceful shrubs and delicate flowers greeted the eye at every turn. The heights were crowned with trees more majestic than any that now exist. The air untainted by foul miasma, was clear and healthful. The landscape far surpassed the decorated grounds of the proudest palace. The angel host viewed the spectacular new earth, the world closest to heaven, with rejoicing and wonder. Now it was time to create Adam, the crowning act of God's creation. God said, "Let Us make man in Our image, after Our likeness, and let them have dominion over all the earth." Clearly, God spoke, He planted, and He fashioned Adam with His own hands, and so the human race on earth did not come from germs, mollusks, and quadrupeds into higher forms. The lineage of the human race can be tracked all the way back to Adam and Eve, the son and daughter of God. The King planted lovely vines growing uprightly yet presenting a most graceful appearance with their branches drooping under their load of tempting fruit of the richest and most varied hues. It was to be the work of Adam and Eve to train the branches of the vine to form bowers thus making for themselves a dwelling from living trees covered with foliage and fruit. There were fragrant flowers of every hue in rich profusion. In the middle of the garden was the "Tree of Life" surpassing all the other trees in beauty. Its fruit was like apples of gold and silver, and had the power to perpetuate life. Now creation is complete. The Bride does not know when the Groom will come to get her. She knows that it will be at night time during her sleep. She must have her place ready. She must always be done by night time. The Bride knows how important it is for her to stay healthy. Food is her medicine. She must eat foods to keep her heart, her brain, her body in tip top shape. She must be trim with a fascinating femininity. She must remain lighthearted trusting in the Groom. She knows that He is in their garden training the vines for His exercise as the Master Gardener. He works in the Most Holy Place doing His legal work, but loves most working in the Garden. She can tell, because He skips and leaps across the mountain tops whenever He plans to work in the Garden, training the vines for their home.

The Unicorn Restores God's Original Plan for the Garden of Eden
Dec 08, 2019

Only One Solitary Bride Chosen by the Last King
Nov 08, 2019